Bakers Acres has a devoted following on facebook to track the progress of a special old dog named Charlie. This is the whole story that captured the little town of Burns Lake and made Chucky famous:

10 year old Chuck has never been away from his Dad but his Dad got a new camp job for a few weeks at a time. Day one of “kennel” training and Chuck refused to get out of the truck, refused to eat and turned his head sideways when I spoke to him. Day 2 and he hopped out of the truck and found a cool placer to sleep by the gate…waiting for Dad, by lunch he decided he was comfy in the house and even asked me for pets. Although he still refused to eat

Last day with Dad before 2 weeks with Brandie….”OMG! It’s the end of the world!”. I love dogs for their amazing ability to take on our feelings. Unfortunately they lack the ability to reason through it. Chuck can’t say to himself “Dad’s just stressed, he’ll come get me in 2 weeks. I want a cookie!”. What he knows is “Dad’s freaking out and I’ll feel it with him cause he’s a good boy!…This must be a horrible place cause Dad’s so worried! I want to go home!”. Gord must learn to control his feelings by controlling his thoughts if only for the moment he walks away. This will help Chuck adjust. Whenever you see Gord tell him “It’s not the end of the world! Chucky is safe and loved!”. I’ll handle Chuck….you guys handle Gord.

Chucky’s third night at the kennel…we made him a spot at the end of the bed on Dad’s jacket and gave him his favorite squirrel. He spent a busy day shopping with Jason and helping with chores in the afternoon…He is tired!

7am….Chuck is still  sleeping…unheard of in this house (even on a Sunday!). He was only up once at 2am for a drink and a pee and straight back to his spot by the bed. I call this victory! From here on out it should be smooth sailing. Whoot! 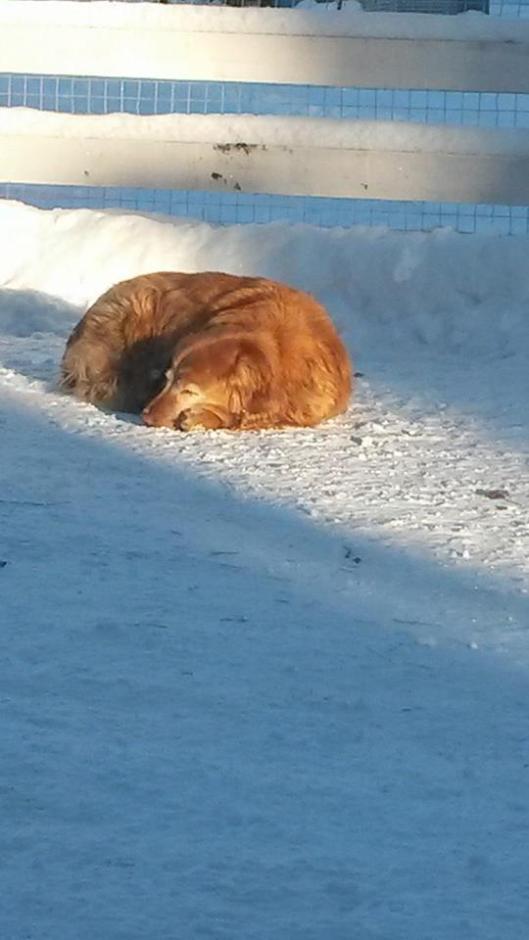 We hosted a birthday party for Chevy. It was too chaotic for Cheese during the celebration but he got his own taste of the birthday cake before bed. YUM!

In preparation for Gord’s arrival we got Chucky ready. His second stay at Bakers Acres went well and he learned I will always come back from town if I leave, and his Dad will always come get him the second he gets home. Chuck relaxed and found a spot to chill. He’s a good boy.

“Comfy Chuck?” The only thing Gord should be worried about now is me stealing his dog! 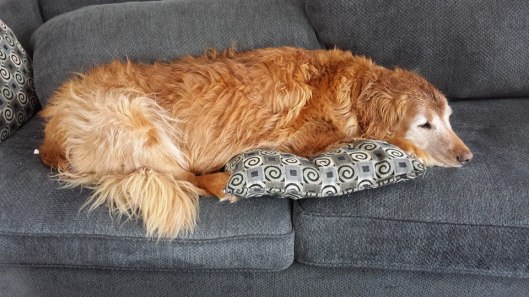 Everyone knows….the game is over when….Chucky gets the ball! Yeesh!! 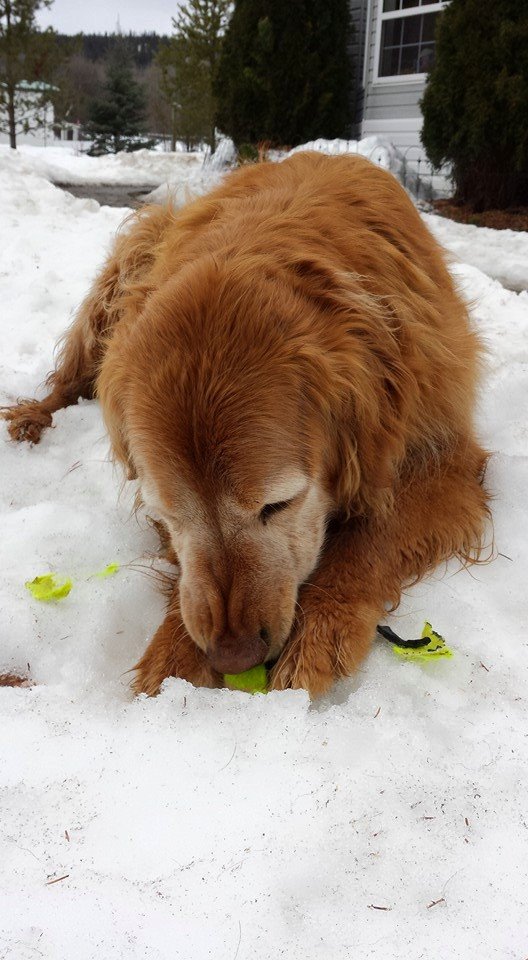 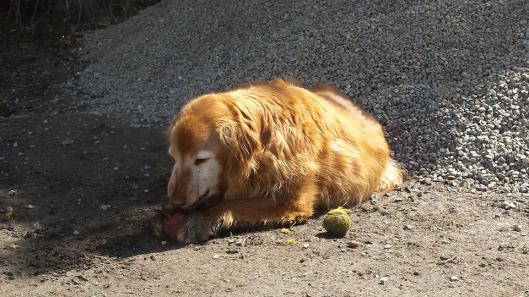 For those of you that went though Charlie’s transition from full time Dad to dreaded torturous kennel…the saga continues. Chucky’s Dad has had to leave him with me for a long time this time. I am again facing challenges of him missing his Dad. Every male that comes onto the property is Chucky’s Bestie (girls just don’t cut it!). I’m trying to rest his tired body by limiting his play…this farm life is too much for an old dog! I’ve also been playing videos of his Dad calling him “Charlie Brown” amongst other things 😉 and I’ve been doing my best to keep him distracted. 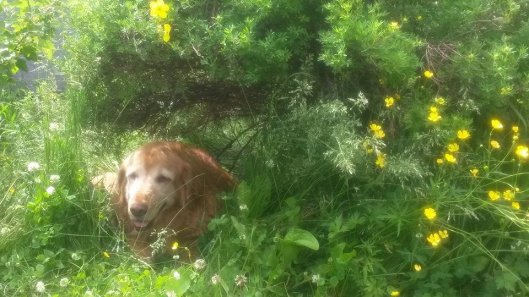 Next time you stop at the kennel give Chuck some extra love and attention as he patiently waits for his Dad to come get him. Been a long haul this time. Remember…he’s on a diet! No cheese burgers, no spaghetti!!! 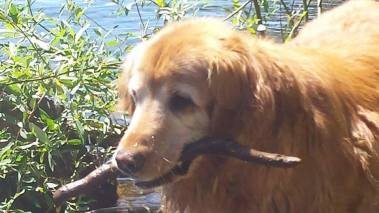 Today Charlie went to the vet for a check up…turns out “Cheese” in obese. Ha! He has not lost a single pound since January 2014. Sooooo Chuck is officially on a very strict diet…no more cheating, no more joking, just good low calorie food with a strict list of acceptable treats….vet highly recommended and vet tech insisted! Cheers for Chuck’s new diet and let’s see how many people we can get to show their support!

Well it has officially been 1 year of this “project” and it is safe to say…I win! Charlie loves me! Gord and I co-parent Charlie with cooperation, understanding and friendship. He allows me a certain amount of “claim” and he listens to my recommendations (I refuse to call it nagging!) for my Chucky Cheese. Although I struggle to keep Gord in line with Chuck’s diet….I’m proud to say Charlie has lost 5 lbs since July!!! Not bad for a “1/2” time diet ;). Charlie owns a piece of my heart and I cannot imagine doing my job without him. 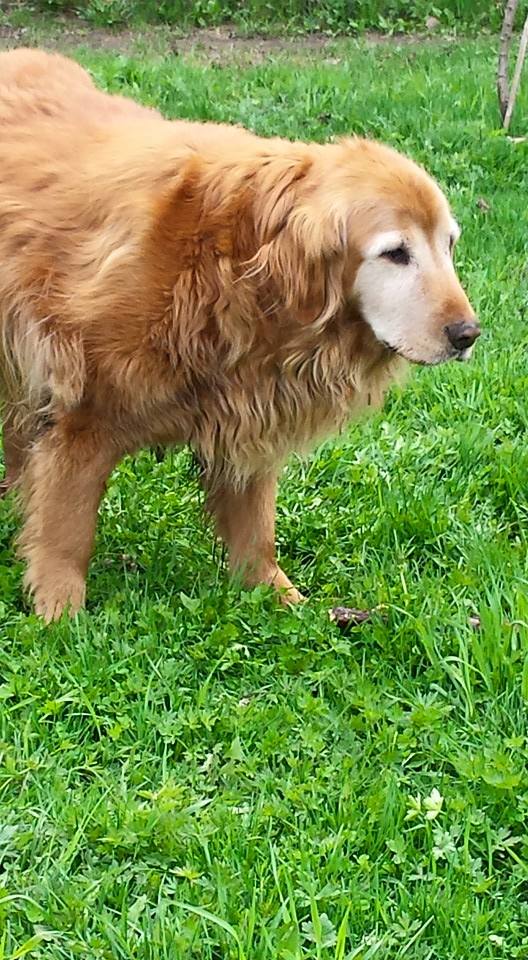 After a week with his Dad, Chuck needed a bath! As a spoiled rotten pup Charlie is not an easy boy to groom. I dreaded this appointment all week…anticipating a rodeo. With Gord petting his head, I got to work and the fur flew!! Literally. I am humble enough to say that (with Gord’s help) Chucky sat quietly for over 3 hours, without fussing, arguing, or being difficult. He was an exemplary “client”…and I was wrong.

My Chucky Cheese went home yesterday. He was so excited to see Gord! He hopped right in the fancy truck with his dirty paws, smiled at me and said “let’s blow this popsicle stand!”. (Stick to the diet Gord…I have spies all over BC….:))

Chucky is not just a boarder. Chuck is family. He has his own spot in the bedroom with his own nightly water bowl…and we walk around him until he is ready to get up.

Chuck’s new spot in the shade. With Gord’s big move to the ocean Cheese is a bit outta sorts. He’s content to be “home” but doesn’t understand why I’m so sad. I’m determined to make this last visit fun for him. He was so happy to see his buddy’s! I will grieve his loss in my life AFTER Gord picks him up. 😦 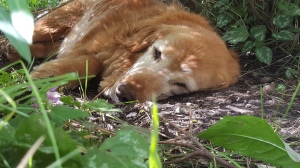 My Chucky Cheese came to visit for 6 days before he leaves south with his Dad and finds a new caretaker. I refuse to be sad. There are no goodbyes…I instead hand over the reins to his Dad with high expectations to send me pictures, find my clone, and keep Cheese on his diet. This is hardest part of my job. How lucky I am to have been part of such a precious, difficult and fantastically loyal pup.

“Love you Chucky Cheese! Keep Gord in line for me….He’s a good boy!”

In the warm hay 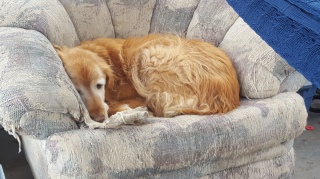 The chair on the deck

“a dirty dog is a happy dog”

By the corner of the house 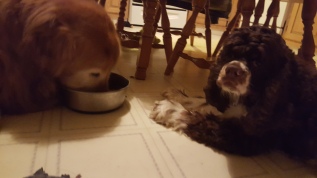 In the hay barn

Cream to protect against the black flies