Yes, the Smith women are a force to be reckoned with. My Grandfather taught the girls to be strong both mentally and physically. My Grandmother taught them to be dramatic. Sometimes you never know which trait is raising it’s monstrous head…you simply duck before it hits you.

Loma Linda is the physical rock of the Smith family. Her strength doesn’t deceive with dramatics, it simply stands solid in fact, aging with silent grace, grateful for another season, nurturing it’s growing flock and warmly embracing the change that comes with it. Without question Loma Linda Ranch is the essence that all of us strive to emulate.

The un-holy anger of “The Beast” was no match for The Smith Ranch named Loma Linda. In typical female fashion we silence the might of “The Wolf Pack” who protected her and we celebrate the strength of the “woman” she is. The fire burned every living thing in it’s path around the small inlet to it’s mouth where it then followed the creek that runs behind the tiny log cabin. It changed course at that junction simply due to the massive guards put in place by her Southside neighbors and friends. You can see where the fire tried to jump the water as it burned trails through the trees and engulfed the fields before attempting to jump the enormous banks of dirt pushed there to protect the guard around old Loma Linda. The evidence of the fight that ended on the soil of my legacy is humbling, inspiring and devastating.

The fascinating way the fire burned…it wasn’t your typical raging madman consuming everything…it was sneaky…twisting death trails around wild blueberry bushes until it gained strength on the crisp, dry bark of it’s chosen prey. The spinning flames ate the skin of the tree and then bit deep into the tissue until the base was no longer able to support the seventy years of growth above ground, the majesty of the aspens collapsed taking the fire with them in search of it’s next meal. The flames discovered the open wound at the vulnerable base and it turned in excited circles to devour the aspens flesh as the rings of the tree suffocate and die. The thousand year old root system of the tree stays still and safe in it’s bed of soil, waiting for spring to pop up new shoots and show it’s resilience in defiance of The Beast. As the fire moved swiftly around the property it left a pattern of black scales over everything like a rat snake creeping fluidly through the newly fallen golden leaves from the unaffected tree tops. Like the way the black wing feathers of a crow shimmer and turn blue just for an instant in the sunlight, the scales of the black snake glint off the grey day light in triumph.

No masculine lunatic exposes itself in The Beast’s movements, only a gentle dancing as it leads with the spoiled attitudes of royalty. Like a Disney movie princess in a seductive evening gown shimmering deep blue and moving with a luxury that only the very rich can afford, then there is a rotating twirl of pure white smoke that engulfs the sparkle to magically become the hard scales of a vicious and demanding murderer. The feminine way the fire burned proves that Nature is the mother of a daughter we call The Beast. Woman against woman never wins. Loma Linda won…but she needed the help of the “Wolves”. The “Wolf Pack” in all it’s masculine glory took on Goliath and then stepped away into the shadows to protect their own families to let Loma Linda shine like she single handedly won. Like a true knight in shining armor the wolves saved the princess and then steps back to watch her shine. Like all good battles, the aftermath is another story. 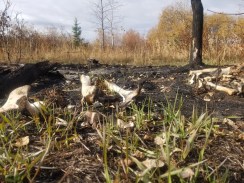 The after math battle to save the roads and fields from spring flooding is still an egg waiting to be fertilized. The paperwork and government loops will consume our minds over the winter as the “fetus” grows. The hard, exhausting, labor intensive work will begin as the next demon approaches the Ranch on the wings of a new season. But this time we will be ready.